Yet more evidence that mobile transactions will be big. Visa had previously committed to spending 100 million Euros per year rolling out mobile payments. They have now made a significant investment in Square’s credit card reading technology. Founded by Jack Dorsey, previously of Twitter’s fame, Square aims to bring mobile payments to the masses. The concept is simple enough – Square is a device that will allow anyone with a smartphone to take payments through it. Imagine that you have a plumber in to fix your boiler. You obviously won’t have enough cash to pay him, so he whips out his smartphone, clips on Square and it instantly becomes a chip and pin machine. In the US there are 27 million businesses that don’t take credit cards. Square’s aim is to give them that facility. As Keith Rabois from the company explained, ‘we’re empowering people to accept credit cards that historically have not’.

The service is proving popular already, with over 100,000 merchants signing up to it.  The investment from Visa gives added weight to the concept of mobile transactions. The significance of this is not simply in helping small merchants to take payments, but in the overall consumer perception of phones as the place to make payments.

They say a picture is worth a thousand words, but Color, the new photo sharing app hopes that it will be worth just 140 characters. The concept is simple; it’s a real-time photo sharing app for people in the same location. One example of how this works was at a recent LCD Soundsystem gig in New York. Here, 82 photos were shared by 26 people. The advantage of Color comes from the real-time photo and video sharing. These are not archived on a server, but streamed only to those at the event itself. There are options to share images via Facebook, Twitter, Email and MMS.

I’m often dubious about ‘the next big thing in mobile’ and it seems plenty of people are putting Color in that category. However it appears to have real potential for a couple of reasons. Firstly it’s all about location and proximity. There is plenty of evidence to show that when it comes to mobile, location is key. We know that 1/3rd of Google mobile searches have ‘location’ intent. We also know that location-based vouchering on mobile has a much higher redemption rate than those without. And of course there’s Foursquare, Facebook Places, Gowalla, SCVNGR … and many more. Secondly the combination of proximity and lack of archiving has an inbuilt privacy that other social networks fail to offer. There is often an assumption by social media networks that users are happy to share everything, however privacy is a major concern of many people. On the up side, as Color is restricted to friends in a specific location, it’s likely to reduce the annoying over-sharing that is prevalent elsewhere (‘here’s a photo of my lunch’). Thirdly, there is a strong social element due to the proximity, a feature to comment or ‘like’ and image, as well as the facility to share with other social media.

Color works for both large events – I can see it being used at large demonstrations – to small gatherings. There are also real opportunities for brand engagement through the app. The potential is there, but ultimately, technology can never drive consumer adoption. Only consumers can.

More from the people at Color here.

The rise and rise of Android continues. After becoming the most popular smartphone OS earlier this year, it would seem that there are more free apps available for Android than the iPhone. Although based on US-figures, data from app research company Distimo shows that whilst iTunes has more apps in total (300,000 vs 200,000 Android apps), over half of the Android Market ones are free.  The forecast also predicts that there will be more apps in The Market than iTunes before the end of the year.

The other interesting bit of data is the trend in iPad apps, which grew by 12%. Whilst app costs have dropped for other (mobile) platforms, the iPad app prices have risen.

The record for the fastest buyout ever has to go to TV tagging company, IntoNow. The new start-up got running at the end of January (2011) and Yahoo have snapped up the company for a reported $13m. What’s TV Tagging you might ask? It’s best described as a Shazam for TV. Just as Shazam users can tag audio, then IntoNow does the same for TV.

With significant changes afoot in the world of television with the advent of IP TV, the IntoNow concept seems like a strong concept. Yahoo certainly seem to think so, hence the valuation of over $1m for each week of the company’s life.

If you can face reading it, the (smug) company blog is here: http://blog.intonow.com/

A new report from Google and the British Retail Consortium shows that mobile search for retail products grew by 181% during the first three months of 2011. That now represents 11% of all  retail searches. Those retailers not in mobile better start thinking seriously about it now.

More on the report here: http://www.mobilemarketingmagazine.co.uk/content/mobile-retail-searches-rocket

Another week and another brand gets in on the mobile-retail act. This week it’s high street brand, New Look with their fully transactional mobile site. Designed and developed by MIG, the site was developed for speed and ease of navigation on mobile. In fact it ticks all the boxes on how to build a mobile retail site: one click purchase for registered users (and a fast registration process if you’re not a user), clear simple menus and social media integration to ‘like’ products.  For a clean, simple yet functional site, retailers would not go too far wrong in taking a leaf out of New Look’s book.

You can see the site by pointing your mobile phone to newlook.co.uk

Brand-based social location is gathering momentum in Europe. The latest brand to join is Republic, the fashion retailer, with a Facebook Deals offer. They will be offering up to 20% discounts for any of their 43,000 Facebook fans who check-in through Facebook Places. 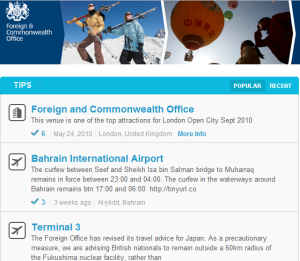 The FCO has started to use Foursquare to get travel advice out to UK citizens visiting or living abroad. This seems to be a smart move. Whilst some out there could claim that it is simply bandwagon jumping, Jimmy Leach from the FCO pointed out in their blog (yes, they have a blog), that they are simply using all channels available to disseminate information. They’re not trying to drive check-ins to their consulates – shame as I fancied getting an ‘Ambassador’s’ badge. In fact given the limited resources that consulates have these days, they probably hope to achieve the opposite. What it does show, however, is that location-based social media can be highly relevant and timely to the audience. For example, if I check in to the UK consulate in Egypt, I would hope to find specific tips relevant to the situation in the country at the moment.

It’s good to see organisations taking the check-in beyond coffees and burgers. As they FCO blog states:

‘Geolocation based social media is something we need to learn to exploit, and the chances are that this little presence will be the forerunner of a far more active, but for now, becoming more involved in the weft and weave of the social web will do us fine.’

Apple has announced that they sold over 18 million iPhones worldwide in the first quarter of 2011. Pretty good going, considering that this is one of their quieter periods. Although Apple’s sales are performing well, devices using Google’s Android are still taking the largest share of the smartphone market worldwide. What is interesting about the latest announcement is that 50% of the $24.6 billion revenue now come from this device. In the last quarter of 2010 it was just 33% of their profits. These profits don’t just count sales of handsets themselves, but include related services such as operator revenues and app sales.

On the flip side, iPad sales were lower than expected. That was largely due to production, as the company sold every tablet device it could make. Their iPod sales were also down, but that is no surprise given that iPhones and iPads have the same kind of functions.

Firstly, they are about profit, not volume. In other words, Apple are not trying to put an iPhone in everyone’s pocket (in spite of Steve Job’s earlier claim), they are a premium product.

Secondly, in order to retain that premium space Apple are vociferously defending their patents.

If there wasn’t enough evidence already to show the growth of mobile search, Google announced last week that it was worth over $1 billion. Nice going. Google are at pains to point out that they are more than just a search company, using the success of Android as evidence. However, whilst there is no doubting the success of their mobile OS (now over 30% of the US smartphone market), the revenue comes from … well, it’s search advertising!