(or How to Do Mobile and Not Annoy People)

This article is to accompany a presentation given at the MobileSquared, Permission Marketing event on 3rd October 2011.

We know that there are many great examples of mobile campaigns across all of the various channels. However, there are almost as many examples of poor campaigns – mobile has the ability to annoy people like no other marketing medium. Perhaps the most sensitive channel of all is messaging – SMS and MMS.

Is Spam a Problem in Mobile Messaging?

Although most people are aware that spam exists in mobile, it is low-level when compared to the problem in email. However, the extent of the problem has been difficult to identify. In July 2011 the DMA conducted a survey with a weighted population sample of over 1000 people. The results were surprising to say the least. 58% of consumers had received, what they considered to be a spam message in the last month. Of these, 11% of people had received 10 or more messages during the month.

We also tried to understand what consumers regarded as spam. The regulatory definition of an unsolicited message is where a consumer has not opted-in either directly or through a sale or negotiation of a sale. However, our study found that consumers took a different view. Over one fifth (22%) of the spam received was from companies where they had previously bought goods or services. It means that whilst the companies were legally entitled to send such an SMS, those receiving them, regarded them as unsolicited. The fact that it represents such a large number of message, clearly shows that there is a problem. Brands are not matching consumer expectations when it comes to permissions.

There has been a problem with spam in its most obvious form over the last couple of years. We found that 42% of people had received an unsolicited message for accident claims compensation, mis-sold insurance or debt management. Such messages are quite incidious are designed to mislead the recipient. Interestingly we found that 3% of people had responded to make a claim to such a message. It shows that consumer are, understandably confused about some brand communications on their mobile phones.

However, it is not just the misleading messages. In an earlier study conducted by the DMA and IAB on mobile messaging, we found that consumers didn’t trust brands when it came to their mobile phones. 71% of people were worried that signing up to a marketing campaign would result in more spam or an additional cost on their mobile phone bill. Marketers were also not meeting expectations in terms of messages. Most consumers understandably wanted offers and incentives in their mobile communications, yet most people felt they were not receiving enough of these. Another element of trust for consumers was about control over what and when they received it. 41% of people said they would be more likely to opt-in where such control was offered.

Getting Right and Getting it Wrong

So what goes into a good permission-based messaging campaign? Almost everyone in the UK is familiar with Orange Wednesdays. Most people in digital marketing know that this campaign was able to generate 15 million responses in just five years, and it continues to be successful. The scheme is an essential part of their customer retention strategy. However, understanding this success shows how a mobile message campaign could be run. The offer is simple: any Orange customer, any friend, any Wednesday, one free cinema ticket. There aren’t complex conditions about who that friend is or which Wednesday they can go. It’s universal. Redeeming the offer is also easy. Just send a message to their shortcode, 241, and you get the voucher immediately on your phone. All you have to do it to show it at the cinema and one of your tickets is free. That immediacy may seem obvious, yet there are many brands who fail to grasp this basic point and make redemption of such vouchers a long, complex matter.

Whilst Orange have got that right, many brands have not. Other mobile operators are the source of frequent complaints from their customers. Too many, irrelevant messages seems to be the consensus. Whilst it is easy enough to opt-out of these campaigns, the evidence is that consumers just don’t want to receive these texts in the first place.

There are millions, even billions of unsolicited emails delivered in the UK each day. It’s certainly an annoyance, yet it doesn’t seem to generate the same level of brand disapproval that unsolicited text messages do. The reason is that mobile is the most personal of communication channels. Orange have carried out an annual study, called Exposure for the last three years. They survey 2000 of their customers about how they use their mobiles and what kind of brand activity they would like. In one of their surveys asked the respondents how they saw different media channels. Television was entertaining, radio was informative. When it came to mobile, most consumers saw it as personal (and personalised). The reason is that mobile is a technology that we rarely share but where we have our most personal of conversations.

In the DMA/IAB study in 2010, we measured consumer recall of brand messages. We found that 98% of people remembered what message they had received 24 hours later. The personalness of mobile means that good or bad, consumers remember brand communications on their phones.

Many brands assume that a 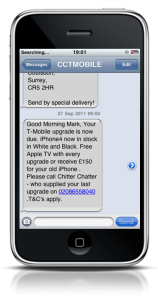 number in their database means there is permission. Consumers do not necessarily think that – there is a ‘permissions gap’. The image on the right is a good example of this. When I first received the message, my immediate thought was ‘how did they get my number’. It turns out that (via my operator) they sold me a phone 18 months ago. Although their T&Cs tell me that they opt-in everyone, the fact is that I neither recalled the company or the opt-in. To me, it is spam. Brands who have existing data need to ask themselves some key questions before embarking on campaign: how old is the data? How did they opt-in (soft or hard) and are they expecting to hear from us?

It doesn’t have to be like that. Many brands have created opt-in databases by being engaging. Walkers Crisps did it by asking people to vote for their favourite flavour. Sprite/Fanta have done it by bribing teenagers with phone credit. An interesting example comes from the German pension company AMF. They got 20-something customers interested in pensions by asking them to send a picture message with their photo. A few minutes later it came back with their photo aged to 70 years. Do people want to really do that? Well, 330,000 Germans did and as a result their brand awareness went up three fold. This is a great example of personalisation. Many brands think, like the company that sent the message above, that personalisation is just a matter of adding your name. That isn’t personalisation, that’s just a mail merge. When a message is unsolicited it simply adds to the dissatisfaction.

One interesting point came out with our study last year: consumers like MMS from brands. We found a 150% higher response rate than SMS. People liked the images, for sure, but what they liked the most is that it looked like the brand. An SMS can be quite anonymous. MMS created more trust through the branding and logos.

Winning user permission doesn’t just have to be engaging. Delivering some (or all) of your service through mobile can be equally successful in receiving user permissions. Swiftcover, for example, were one of the first companies to do this with insurance. Airlines are using mobile for check-in. Similarly, Argos have seen considerable success with their text to take home service – over 6m people have used it with an estimated value of £30m from the resulting sales.

Once you have collected some permission-based data, it’s important to engage people in the right way. Offers are important, but relevance is also key. However, with mobile, timing is everything. Obviously you can’t send messages in the middle of the night, but as mobile drives fast responses you need to carefully plan when is the best time for a particular message. Mobile is exactly what it is. Mobile. So where is as key as what and when. Targetting by location can bring some of the best response rates.

Messaging: The Driver for Mobile

Getting permissions right for messaging is fundamental to any marketing campaign. Think of SMS and MMS as the drivers for mobile. Sometimes it is the campaign, but sometimes it’s just a great way to deliver response or service as part of a wider engagement. However, once you have gained the trust of your customers through mobile, then delivering engagement through other channels is easier and more successful. After developing a successful messaging customer base, M&S were able to launch their highly successful mobile site. Much of this is about test and learn: start with a sample group and develop the campaign from there. Don’t expect everything to be successful, but respond to customers and adapt. Their mobile site is not entirely the same user base, but the key is that having understood trust and permissions of their user base they were able to include these elements in their mobile offering.

From Push to Pull

For many brands, mobile campaigns are about pushing out the messages and hoping for a good enough response. They are also hoping that there are not too many opt-outs or complaints. However, brands need to think more in terms of ‘consumer pull’. Create great engaging offers or deliver service. Promote it well and learn from your mistakes. In the end, good permission-based mobile marketing is about understanding user expectations and meeting them.