Whilst mobile technologies move quickly, its rise has been steady and incremental for well over a decade. There has not been, nor never will be a ‘year of mobile.’ So largely speaking, most trends in mobile have already started. If you’ve been reading the marketing and technology press then you will already have a good idea what will happen in 2013. But which trends are just fads and which will become a reality? 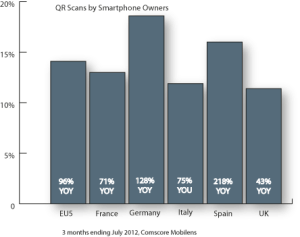 It feels like QR, Augmented Reality and NFC have been on mobile forever. Don’t expect to see any significant shifts. Consumers will still not see the point of scanning a QR code, with less than 20% of Europe’s smartphone owners doing so. AR will remain exciting and interesting, but with a few million users it will continue to be niche for brands. NFC is also struggling. The lack of a chip in the iPhone5 hasn’t helped adoption, and neither has the lack of terminals. The biggest hurdle is consumer perception of security. Sure, we are beginning to see NFC in credit cards, but it is all about perceptions, and payment providers have a lot of work to do to build trust.

Similarly mobile display advertising will only see an incremental rise. Although brands have been spending more in recent years, it still represents a very small portion of budgets (anyone remember iAd?), especially when compared to the time spent in mobile. Mary Meeker calls this ‘an opportunity’, but maybe brands don’t spend because it doesn’t deliver the numbers. Facebook and Google share prices have suffered as a result. But above all, mobile advertising doesn’t deliver a good experience on mobile. In the UK the operators announced a joint project called Weve, so expect to hear plenty more about it in 2013. Just don’t expect any significant shift in behavior.

Mobile Payments have been on the rise for the last few years. It is clear that these payments will not come through any single channel, such as NFC. Instead it will be a matter of consumers using payment through a range of apps, brand apps and mobile sites. Apple’s Passbook shows potential, but the two big players in this space are likely to be PayPal and Square, both of whom are creating secure, frictionless experiences.

China, obviously has seen significant growth for the last two decades, and it has become the largest consumer market, the largest smartphone market and at the end of 2012, mobile internet access was greater than desktop. In 2013 China will be the place not just of ‘uptake’ but a place of real innovation and opportunities for brands. Witness Lei Jun, who is head of technology firm Xiaomi, described as the ‘Chinese Steve Jobs’

Virtual retail and the rise of the ‘unstore’. Last year I predicted that virtual stores such as Tesco Homeplus in Korea would become more widespread. In 2012 we saw various offerings from PayPal, Tesco F&F and many more. However these were largely PR stunts. However in 2013 we are likely to see more permanent offerings, spurred on by the announcement that Chinese retailer Yihaodian will open 1000 such stores. 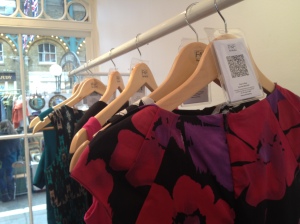 Data and especially ‘Big Data’ were the catch phrases of 2012. As someone put it to me ‘it’s just data’. The now ubiquitous nature of smartphones means that data is being generated constantly. Combine this with Open Data and APIs and all kinds of things become possible. Twitter has become a major source of such data, predicting the US presidential result or spotting trends five hours ahead. In Kenya they are using it to track and manage malaria. Brands can also use this data to bring a better understanding of their customers and deliver a better service.

Data Privacy – the flip side of big and open data is that as consumers we will see more brand invasion of our privacy. Witness the numerous privacy issues around Facebook. A couple of slightly scary trends are based on facial recognition; Scene Tap and Facedeals. Technologically interesting, it remains to be seen if they are acceptable to consumers.

Connected Devices – the smartphone may have reached its obvious conclusion. Largely speaking it does everything we need. There will be improvements in screen and interface technology in 2013, such as better voice control, gesture control and variable texture or haptic screens. The big change, however, will be in connected devices.

Google Glass project has been widely hailed as the future. Patents from Microsoft and Apple demonstrate that the space is hotting up. However, that kind of wearable technology is likely to be limited; both looks and practical issues from potential eyesight damage will not see AR glasses become universal. The interesting trend is in devices such as Nike Fuel. For brands, it will mean bringing more service into the product space. However, simple, cheap devices will also become more prevalent. Witness the Red Tomato Pizza fridge magnet. A simple, low-cost approach to brand engagement.