Earlier this year the picture below was trending on Twitter, with the ironic statement (and I paraphrase) ‘What on earth is this guy looking at? The World or something?’. It looks like we’ve become a society of phone zombies. 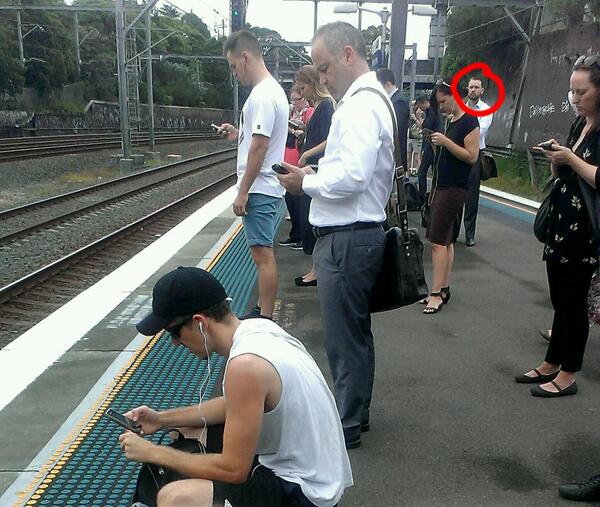 Instead of engaging in conversation with our friends or family, it seems we are constantly distracted by our smartphones. As if proof were needed, a recent IPSOS study identified this trend. They surveyed 16,000 people in 20 countries and 60% of them agreed that they were ‘constantly looking at their screens’. In the UK though, 71% said they were glued to their phones (second only to China). Perhaps our zombie behaviour is best summed up by Buzzfeed’s, 23 Pictures that Prove Society is Doomed. This phenomena doesn’t just impact on our social lives, there are other risks. One cyclist, writing in London’s Metro paper, explained that phone zombies were the most frequent hazard she had to contend with. Maybe in the future our smartphones will need proximity sensors to alert us of traffic hurtling towards us.

Is the phone zombie good or bad for marketing? A decent ad person would spin the problem into an opportunity. For example, we reach for our mobiles within 15 mins of waking and check them up to 150 times per day. That’s a lot of marketing opportunities. But perhaps, just perhaps the best thing we can do is to help society act a little less like the living dead and occasionally speak to other people. The Brazilian beer brand, Polar tried to do exactly that. They created the phone nullifier. A bottle wrapper was able to block the phone signal for anyone within a few feet, thus nullifying the phone zombies and ensuring that people enjoyed their drink, whilst conversing with their real friends.

Arguably though, the phone zombie could be seen as a natural behavior. Humans, especially the younger variety, enjoy media that distracts us from the real world. The Victorians complained that young people spent too much time reading books. Television and video games have constantly been blamed for corrupting teenagers. Perhaps the phone zombie is just another example in a line of media distractions. Before smartphones, commuters were hiding behind newspapers on their journey to work. And maybe the only reason the man in the picture is looking at The World was because on that day, his battery had died.