If you haven’t come across Depop yet, think of this app as Etsy meets Instagram. The UK business first launched in 2013 and gained nearly 2 million users in its first year. While that growth may not be stunning compared to say, Snapchat, it’s gained considerable traction with millennials – the demographic that typically drives new channel adoption. Depop is chock full of vintage stuff (100,000 items at the last count). Mostly clothes, but plenty of shoes and a smattering of vinyl records.

It works because the app does everything a contemporary mobile experience should do. The Instagram-style layout is easy and familiar. It has a useful set of search tools that add to the product relevance. There are neat little buttons to comment, like and most importantly, to buy the items. It’s almost as simple to sell on Depop. Take a picture, upload it, add a price and off you go. The success of the app comes from this combination of an immediate, frictionless experience and a collaborative approach. Or as their CEO says, ‘it’s designed with the mobile in mind and is social at its very core’.

Depop has the opportunity to be distruptive in the retail space. However, collaborative apps are not without criticism. AirBnB rents more rooms the The Hilton Group, but they are not subject to the same taxes or regulations that a traditional hotel chain has (and I won’t even mention the controversies associated with Uber). They’ve also attracted not just those with a spare room for the night, but people investing and making a living from AirBnB properties.

Depop also appears to have commercial traders, but thanks to the strong social element, it retains a homely feel. When it comes to vintage retail, the market isn’t dominated by large businesses (unless you count Oxfam), nor does it have many of the regulatory issues that hotels or taxis endure. In fact, the opportunity for Depop is by bringing the vintage market into one neat place, right where their audience is.

There’s plenty of optimism for the app. They’ve already ironed out a few complaints about buginess. At the start of the year they gained £5m in VC funding, opened a New York office and hired Ex-Reddit GM, Erik Martin. Whilst Depop are not the only player in the vintage market, it looks as though they have the right UX for the right audience to succeed.

I’ve been banging on for some time about how APIs are the future for brand apps. The idea is simple. If brands created APIs for their activities, other people would take that information and create far better apps (and at no cost to the business). Strangely, it’s something that government bodies, such as Transport for London seem to understand.  Two of the best apps currently, are API-based, combining open data with a great user experience:

It seems like everyone in London is using this app, and no one has a bad word to say about it. Citymapper has so many functions, in a simple UX, they are impossible to list here.  Even as a life-long Londoner, Citymapper has suggeseted transport routes that I have never considered (and often faster ones). The app achieves its goal through accessing a number of APIs from TfL as well as Foursquare data and delivered via their own algorithm. It’s a great example of how open data can be used to deliver an excellent user experience.

Although it hasn’t achieved the success of Citymapper, Whisk is another example of a great, frictionless experience. After selecting a recipe, and the number of diners, it lists the price of the ingredients across a range of supermarkets. They use APIs from Tesco, Ocado, Waitrose and Asda. You then select which you want to buy, and the supermarket. The best part is that the app allows you to add these items directly to the shopping basket of your chosen supermarket’s app.

Given these examples, why doesn’t every brand create an API for their data and simply open it up to developers? The results will be a far better experience than they could ever create (not to mention many more users).

I’ve dug up a some more information to enhance my post about Nokia Ovi Store’s 3 million users per day. I guessed that there were around 195m Nokia Smartphone users worldwide. Not a bad guess. Nokia tell us that 165m people are registered with the Ovi Store. Great news. It still puts them way below itunes app downloads though. This handy chart shows the comparison between the two: 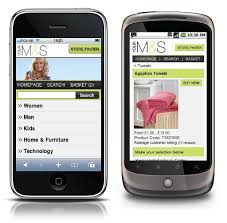 Whilst brands have been rushing to get their apps (and the iphone variety in particular) into the appstores, a study has found that most mobile shoppers would prefer to use the mobile web. An Orange study (Orange Exposure 2010) has found that 70% of people would prefer it that way. In many ways these figures are unsurprising. So many brand apps could have been done using the mobile web, at less cost and with a far greater reach. Marks and Spencer‘s understand this. They don’t do apps. Apps don’t reach many of their customers (an interesting side note to this is that men are far more interested in downloading apps than women). Instead they came up with a fully transactional site with 26,000 products. And people buy from it. Would they have achieved the same success with an app? Very unlikely. Although the ebay iphone app has been successful, the company has a very broad demographic, and a very good mobile website.

Mobile retail is currently small – around £125m in the UK – but set to grow. Figures from Verdict and Ovum suggest that mobile retail sales in the UK will more than double in the next two yours with 4% of online sales being made by mobile browsers. Given that only around 2% of the UK buy through their mobile at the moment, the potential there waiting to be realised.

You can get more mobile internet stats here.

Long gone are the days when brands could stick out a press release and customers would come and download their app. With 200,000 apps in the appstore (not forgetting Android Market, Nokia Ovi Store and BlackBerry World), it is getting harder to be seen. In the UK, Barclaycard have had a major spend in TV to promote their contactless payment systems. As a result their Waterslide and Rollercoaster games have seen 12 and 10 million downloads respectively. As I recently said at a conference, give me their ad budget and I’ll get you 12 million downloads for an app. NatWest Bank have had a great deal of success with their iPhone app, which was initially promoted through TV advertising (a spend way in excess of $200k). They were greatly helped along the way by Apple using their app in their full page newspaper ads. However NatWest also experimented with O2’s direct marketing channel, O2 More. They sent a message to O2’s iPhone users who banked with NatWest inviting them to download the app. 29% of people did so. The bank won’t reveal the cost of this campaign, but I am certain it was much much less than their TV advertising.

In reality, few brands are prepared to spend the $200k to promote their app. One major music company offered a budget of £1500 to create and promote their app. Just last week another company told me their budget was £3800. That clearly isn’t enough, but similarly it’s impossible to come up with hard and fast rules for the spend on promoting an app. If you are a media channel already then promotion is easy. Britain’s Got Talent had the top downloaded app during the series and it was only promoted through the show. Similarly The Guardian’s highly successful iPhone app has only been advertised in the newspaper. On the other hand, has anyone heard of The Cooperative’s app ‘Grown By Us’? It’s a good app and totally on-brand, but there was no money spent on promoting it. We know that getting an app in the top 100 will increase downloads by as much as 5 times.

Ultimately the point is that there is no simple formula on what should be spend on promoting an app. The key is that there MUST be some kind of app promotion strategy. For some, low-budget guerrilla marketing may work, for others a mobile PPC campaign may do the trick and for others it’s an above the line campaign. There are certainly opportunities with mobile PPC and channels like iAd for developers. This article explains how a developer used this method to achieve top rankings in the iPhone appstore.

The decision on which approach to use will depend on the app, the brand and the available budget. And as with any marketing (and the app itself for that matter), there is no substitute for great creative ideas. One thing is for sure, brands cannot simply think ‘build it and they will come.’

Most of the top appstore downloads (outside of games) are branded apps, but many of those are pretty poor. This is a good blog on from a number of brands on how to develop the right sort of app.

With all the hype over app stores (yes, I do believe there is a lot of hype), it’s worth putting a bit of perspective on the size of the marketing compared to other mobile-related activities:

iphone has 35 million users is 0.7% of all phones worldwide and 3.5% of the US market (yes, it has sold 50+ million, but various people are on upgrades so in terms of active users the fiture is lower).
The current value of app sales across ALL handsets was $7 billion in 2009.
The value of MMS (arguably a niche medium) was $28 billion in 2009 (1.4 billion active users).
The global value of SMS? $128 billion (3 billion users).
*figures from Portio

Whilst a lot of media types are running around telling us the future of mobile is in apps, this kind of puts things into perspective really.