Presenting iPhone apps to a large audience always presents a problem. Whilst Steve Jobs has a natty cable that projects his iPhone onto a big screen, they don’t make one available to us ordinary folk. The solution? I borrowed an idea from a friend, and made a bracket to mount the iPhone in front of a video camera (held together with gaffer tape). It kind of works, but it’s very shakey and very clunky. And if the projector is ceiling mounted, it’s too high to plug the cable in at all.

I think I’ve found a proper solution though. I was at an exhibiting show a couple of weeks ago and saw the iTab, which looks and works like a giant iPhone. With screen sizes up to 86″ it looks good in front of an audience. Not only that, but having a true touch-screen means the system is also good for exhibition booths. Everyone wants to walk up to it and play with the thing. The Times has just bought one to show off their new app.

Although it’s a fairly large investment to buy it (£5k + depending on the size), the distributor, Touch2View will rent it by the day (and they’ll come and install it to boot). For more information and prices see their site: www.touch2view.com

How well do different apps perform across different platforms: Facebook, iPhone or Android? Very conveniently, someone has compared these platforms (see diagram below) with some interesting results. Due to the sheer number of users, Facebook wins out on total apps, but looking at apps per user then the iPhone wins hands down. But that is hardly surprising. When it comes to mobile media, the iphone is very much about apps. With FB it is less about apps and more about basic communication or basic functionality that is already in the system.

What is also interesting are the type of apps in each top 10. For the iphone it’s all games. Facebook is mostly games, but includes some utilities, whereas Android is almost all utilities. This may simply be a matter of necessity. iphone users may be more than happy with their operating system and the only extras they need may be a bit of entertainment. Conversely, the Android users may simply have fewer games to download. But perhaps there is something more to it than that? Whilst the iphone has sold around 65m handsets, the figure of 120 million means that includes the ipod touch. That device is primarily about entertainment, so the fact that it is mostly games that are being downloaded makes sense. Similarly if you want games on your phone then the iphone is going to be the device of choice because of both the functionality and the range of apps available.

Long gone are the days when brands could stick out a press release and customers would come and download their app. With 200,000 apps in the appstore (not forgetting Android Market, Nokia Ovi Store and BlackBerry World), it is getting harder to be seen. In the UK, Barclaycard have had a major spend in TV to promote their contactless payment systems. As a result their Waterslide and Rollercoaster games have seen 12 and 10 million downloads respectively. As I recently said at a conference, give me their ad budget and I’ll get you 12 million downloads for an app. NatWest Bank have had a great deal of success with their iPhone app, which was initially promoted through TV advertising (a spend way in excess of $200k). They were greatly helped along the way by Apple using their app in their full page newspaper ads. However NatWest also experimented with O2’s direct marketing channel, O2 More. They sent a message to O2’s iPhone users who banked with NatWest inviting them to download the app. 29% of people did so. The bank won’t reveal the cost of this campaign, but I am certain it was much much less than their TV advertising.

In reality, few brands are prepared to spend the $200k to promote their app. One major music company offered a budget of £1500 to create and promote their app. Just last week another company told me their budget was £3800. That clearly isn’t enough, but similarly it’s impossible to come up with hard and fast rules for the spend on promoting an app. If you are a media channel already then promotion is easy. Britain’s Got Talent had the top downloaded app during the series and it was only promoted through the show. Similarly The Guardian’s highly successful iPhone app has only been advertised in the newspaper. On the other hand, has anyone heard of The Cooperative’s app ‘Grown By Us’? It’s a good app and totally on-brand, but there was no money spent on promoting it. We know that getting an app in the top 100 will increase downloads by as much as 5 times.

Ultimately the point is that there is no simple formula on what should be spend on promoting an app. The key is that there MUST be some kind of app promotion strategy. For some, low-budget guerrilla marketing may work, for others a mobile PPC campaign may do the trick and for others it’s an above the line campaign. There are certainly opportunities with mobile PPC and channels like iAd for developers. This article explains how a developer used this method to achieve top rankings in the iPhone appstore.

The decision on which approach to use will depend on the app, the brand and the available budget. And as with any marketing (and the app itself for that matter), there is no substitute for great creative ideas. One thing is for sure, brands cannot simply think ‘build it and they will come.’

Apple have gone one way, by restricting their app development to Object C (not the easiest of development languages), Google have gone the opposite. Their new App Inventor uses a set of simple tools and an even simpler interface to allow anyone to create apps. Brilliant! I love anything that democratises things, and whilst I’m sure that many developers will complain that ‘it can’t build a real app’, we could see some really interesting, creative and fun apps coming from this.
It has been argued that one of the strengths of Android is their openness towards app development. There have been reports of developers leaving Apple’s strict regime in favour of Android’s more open platform. With the new App Inventor it looks like they could attract a whole new group of people who have the imagination but lack the programming skills. Now, what app can I think of ….

Apple’s prudishness towards nudity or even bikini’s in their apps doesn’t extent to nudity in art. A Polish developer has launched a series of puzzles based on nude art: Modigliani Nudes Puzzle, Bathing Nudes Paintings Puzzle, Fabulous Nude Paintings Puzzle and Classic Nude Paintings Puzzle. And Apple seem quite happy about that.
To some extant I can understand where Apple are coming from. The app bans, though rather prudish, seem to be an attempt to maintain a certain standard within the appstore. There are plenty of lads mags and Snoop Dogg videos with enough titillation to keep the average teenage boy happy. Apple are implying that that type of content is denigrating to the brand. Fair enough. But the problem is as soon as you start to act as censor, lines can become difficult to draw and you stand in danger of looking draconian or ridiculous. I’m sure these are issues that Google and other internet portals have had to consider. The underlying point is that Apple are (arguably) a distributor and not a publisher of the content. And as such, censorship is a difficult game to play.

Any post that I write about mobile sales stats gets the most hits on this blog. So judging by that, it would seem most readers are stats obsessed. UK firm ustwo have launched a nice little iphone app that will satisfy any appstore stats curiosity (or should I say obsession). The PossitionApp surveys the store every few minutes and brings back real time stats on app downloads and a charted position for the last six months.
What’s more AdMob (that’s Google to you and me) have sponsored it for two months, so you can download it without having to pay the standard £7 fee. It won’t become a top selling app itself, but it provides a useful tool for developers. 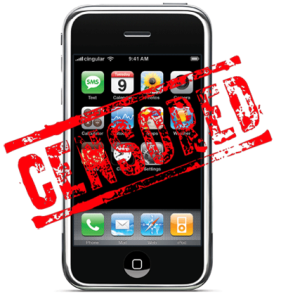 The Apple/Google relationship has been become increasingly sour recently. The latest manifestation of this seems to be the censorship of the word ‘Android’ in apps in the iphone appstore. According to a report in Mobile Crunch, one developer had a reference to their entry into the Android awards removed from their appstore review.

Apple has previously censored words on the grounds of profanity, but have been largely ridiculed for removing ‘boobs’, ‘booty’ and ‘piss’ from apps such as dictionaries. The censoring of other brands appears to be a new step for Apple.