‘During the @kennethcole runway show, out of respect for other members of the audience please make sure your phones and tablets are switched ON. This show will embrace the intrusive nature of social media.’

It wasn’t long ago that fashion shows were largely private affairs, where photography and video were tightly managed. Yet  the opening words above, greeted the audience to Kenneth Cole’s 2013 New York Fashion Week show.

The advent of smartphones, with high megapixel cameras and social media apps has challenged the highly controlled world of fashion shows. That challenge is similar to many retailers, where consumers are able to search, photograph and share products instantly. Whilst most runway shows barely tolerate smartphones, Kenneth Cole clearly embraces it. His front row was littered with fashion bloggers all using their smartphones to Tweet, Instagram and Vine (if that is now a verb) the event. He went a step further though, and at the end of the show the models came down the catwalk sending live Tweets from their phones. It was in the name of charity, as each Tweet sent resulted in a $1 donation from Kenneth Cole to an Aids charity.

By embracing smartphone driven social media in this way, Kenneth Cole has shown how brands can:

–       Bring amplification through sharing these events in social media

I previously blogged about how mobile social media were disrupting fashion and retail, but Kenneth Cole’s show takes it much further than that. Whilst it creates an opportunity to reach a global audience previously unavailable, Kenneth Cole is using mobile and social to challenge the traditional dynamic of fashion. With fashion bloggers using the new tools of the trade, it brings immediacy to a global audience. With models Tweeting down the catwalk, they are no longer simply ‘hangers’ for the clothes but now active participants in the event. And with celebrities populating the front rows, alongside the journalist and bloggers, are mobile and social creating a new form of reality fashion show?

A roundup of the tablet landscape

In early 2011, Apple’s CEO, Tim Cook announced at Goldman Sachs that tablets will overtake PC sales by the end of 2012.

We know from Tim Cook’s statement that 55 million iPads had been sold in the 18 months since Apple’s was launched. That makes the iPad more successful in terms of sales rate than the iPhone (3 years to 55 million) and much more successful that the iPod. The iPad currently dominates the market, however, there has been strong growth in Android-type devices. Tablet sales rocketed in the third quarter of 2012 (according to end of 2012 figures from IDC), and Samsung and Amazon saw significant sales increases. According to analyst house IDC more than 27.8 million tablets were shipped in the third quarter of 2012 – up 6.7 percent on the previous quarter – but during that time Apple saw its market share cut to 50.4 percent, compared to 65.5 percent in the previous quarter.

According to Comscore data from the end of 2011, tablets skew more towards men, however as tablet devices have grown, the demographic has switched, and are now used by more women than men in the US:

As expected, the earlier adopters tend to be of higher income, but are more likely to choose a tablet over a smartphone. As with smartphones, cheaper devices and notebook replacements (see below) will create demand from lower income groups.

For many, a tablet is not a PC replacement, but an additional (yet another) device, that is hardly surprising. Comscore tell us that in Europe 34% of iPad users also own an iPhone.

According to Flurry in Sept 2012, tablet users tend to be older than those with smartphones.

Where are they used?

It confirms the trend that they are largely a domestic device rather than a mobile one. The use in the living room also demonstrates the shared nature of tablets. Data from YouGov, stated that in the UK there is 8% tablet ownership, but significantly it represented 20% of UK households in June 2012 (http://econsultancy.com/uk/blog/10240-tablet-stats-ipad-still-rules-but-the-competition-is-catching-up).

As expected, tablet devices are rapidly replacing notebook sales, with a prediction from NPD Display Search (Dec 2012) that they will overtake notebook sales this year:

In the US, Comscore tell us that nearly 98% of tablet data usage was from the iPad at the start of 2011. As with the iPhone, it would seem that users do more of everything than other devices. They are also beginning to overtake desktop usage. Comscore’s November 2011 figures show that tablets represent 30% of non-desktop traffic. That is considerably higher than the percentage of ownership of ownership.

When it comes to purchasing, tablets also perform well. A study by Adobe Research over the 2011 US holiday period found that tablet users spend 54% longer on sites than mobile users, and purchase over 20% more than desktop visitors. The following chart shows a comparison using average retail order value.

The high sale value is partly down to the ease of use of the devices. In an IAB study in December 2011, nearly half of respondents said they used their tablet because it was ‘the easiest to pick up’ and 37% said that it offered the easiest user interface. But it is also worth considering that as tablets skew towards a higher income bracket, users are more likely to purchase.

Forecasts from eMarketer show that tablet devices show a greater growth when it comes to purchasing, with tablets representing nearly 10% of all US retail sales by the end of 2013:

Hardly surprisingly, the focus on tablet content is much more towards home/family than on smartphones (according to Comscore data):

Last Thing at Night (and First Thing In the Morning)

Data from Nielsen in 2011 found that 70% of tablet owners use it in front of the TV. Clearly, the iPad is the device for two screening. Interestingly though, the iPad is used in bed by nearly 60% of owners and appears to be replacing the book at bedtime. That figure is similar to smartphone use, but with tablets the spike at the end of the day is even more pronounced. Both the IAB study and data from Comscore in the US show that later in the evening, tablets are used more than mobile or television. On weekends there tends to be an earlier peak:

IgnitionOne, revealed that year-over-year (YoY) paid search spending growth for tablets doubled that of smart phones in the fourth quarter of 2012 as mobile devices as a whole grew to 18% of search budgets in the U.S

The Sept 2012 Flurry report found that tablet users were more likely to download apps than those with smartphones, and used the devices for playing games:

According to Comscore in Sept 2012, tablet users are three times more likely to watch video on their device than smartphone users. Over half of US users (53%) ever watch a video during a month, with nearly 10% doing so every day:

Inevitably, video viewing is much higher on tablets than mobile. As a total percentage of online video views, tablet (3.21%) surpassed mobile (2.21%).

Ooyala’s “Global Video Index” report (Nov 2012) suggested that 71% of tablet users watch long-form content (30-60 mins), whereas on mobile it is much more focussed on short-form ‘snacking’ behaviour. The report also showed that tablet viewers were far more likely to complete a video view longer than 10 mins than any other device: for videos longer than 10 minutes was 39.2%, compared to 35.3% for CTV & GC, 26.8% for desktops, and 22.3% for mobile phones.

For shorter videos, tablets were still saw more completions than mobile, but were surpassed by connected TVs.

The Preferred Device for Reading

Whilst it is no surprise that tablets are preferred over mobile for reading, they are also more popular than dedicated e-readers (Online Publishers Association, June 2012). That naturally includes news and magazine content. Data from the MPA, November 2011, found that 45% of tablet owners spend 1-3 hours per week reading magazines. This makes the tablet the most-used digital device for reading:

Data which compared 2010 and 2011, reported by eConsultancy, showed that conversion rates for tablets were higher than mobile – 2.3% compared to 5.4% and 5% for desktops and tablets respectively. 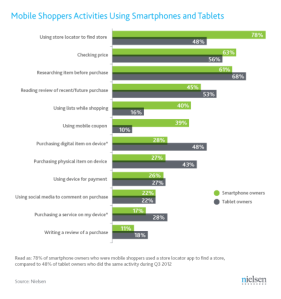 The research from Nielsen (Dec 2012, US) shows that shoppers will tend to use their mobile for

For tablets, though, consumers are more likely to:

Although two screening use is largely similar between smartphone and tablet, the Nielsen data (US, Dec 2012) suggests that tablet devices are more popular for two-screening in older audiences: 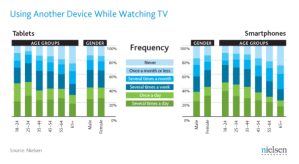